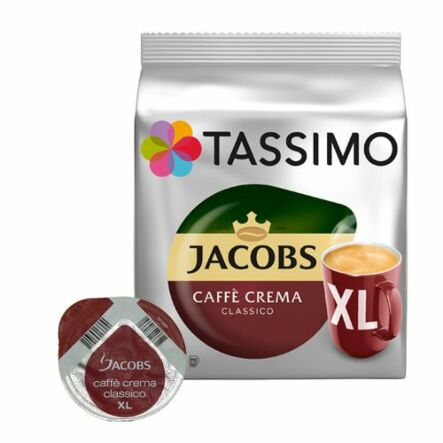 Caffè Crema is one of Jacobs’ signature blends and has been among the most popular coffee blends in Germany and neighbouring Switzerland and Austria for years, where it is known and treasured for its silky soft and aromatic body and beautiful, golden crema.

With Jacobs Caffè Crema, you get a classic crema coffee brewed like an Espresso, with all the qualities of an Espresso when it comes to flavour, aroma and crema, but in an extra large 215 ml cup to really quench your thirst for coffee.

We deliver this delicious crema in packs of 16 pods and, as always with Kaffekapslen, at a reasonable price, lightning fast and right to your doorstep.

Jacobs is Germany's most popular coffee brand, and the familiar crown on Jacobs packages has been a well-known and treasured sight on German coffee tables for decades. Jacobs can trace its history back to 1895, when the company was founded in Bremen by Johann Jacobs. Today, Jacobs is one of Europe's largest coffee producers, and has been part of the Dutch Jacobs Douwe Egbert Group since 2015.