We use cookies to make your experience better. To comply with the new e-Privacy directive, we need to ask for your consent to set the cookies. Learn more.

Skip to the end of the images gallery 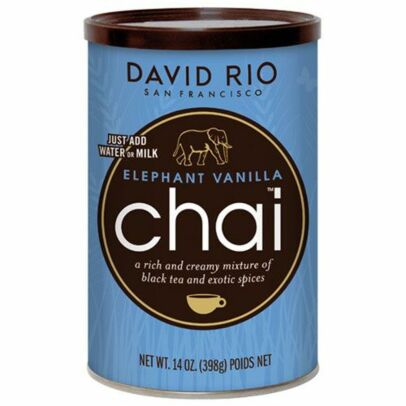 Skip to the beginning of the images gallery

David Rio introduced their Elephant Vanilla Chai to their product range in 1996. It was actually this tea that started it all. Elephant Vanilla Chai was originally intended for the Japanese market only, but quickly became so popular in the company’s domestic market, the USA, that it has been more widely marketed ever since.

This is a black chai tea mixed with exotic spices such as cinnamon, ginger, cardamom, cloves and vanilla. You can drink it as a masala, where the tea is brewed with hot milk, or as a creamy, spiced tea brewed with water.

It is also delicious as an iced tea with a few ice cubes (remember to brew it hot first, and then put it in the fridge overnight to cool)

Whatever your favourite flavours, you are sure to fall in love with this enchanting taste of vanilla and chai spices.
Enjoy it alone or with a loved one.

David Rio is an award-winning tea company from San Francisco, USA. Since the company was founded in 1996, David Rio has developed into the leading chai tea brand in the United States. David Rio's goal is to become the world's leading premium chai brand, and its products are currently exported to over 50 countries around the world.

David Rio also has a goal to contribute to the protection of the planet's endangered animal species, and donates every year to organisations that promote animal welfare. As a reflection of this, David Rio teas are named after endangered species.