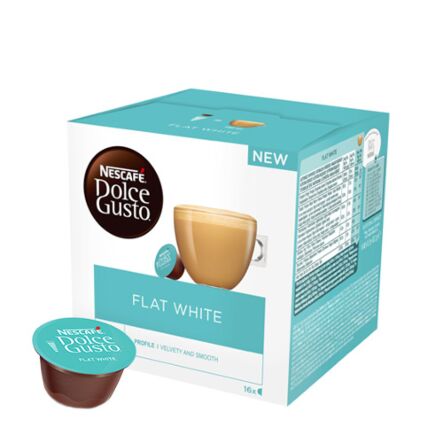 In recent years, a Flat White has increasingly become an integral part of any chic café. With a Flat White you get a nice variation to other milk-based coffees such as cappuccinos or lattes, where it is especially appreciated for its more intense coffee taste.

For behind the Flat White name hides a coffee that in its style resembles a Latte, but which comes in a slightly smaller cup size, and with a higher content of espresso compared to milk. In other words, you still get a milk-based coffee, but where it is to a greater extent the espresso taste than the milk taste that dominates.

In a coffee context, a Flat White is a coffee with a slightly exotic background. This is for once not an Italian coffee variant, but rather a coffee that has Australian ancestry. And the legend says that it was invented because the coffee drinkers Down Under were frustrated by the large amount of coffee foam in a cappuccino, and therefore instead asked for a 'Flat White' - that is, a cappuccino without milk foam.
It turned out to be a popular concept. The Flat White has since spread across the globe, and is now also available as part of the Dolce Gusto® range.

With a Flat White, you get a coffee experience that is perfect for today's small coffee breaks. For a Flat White is a real new classic in the coffee world, and a good alternative to a cappuccino or latte, if you want a coffee where it all does not have to drown in milk.

We deliver it in a package with 16 pods that brew 16 cups.

- of which saturated fats (g)