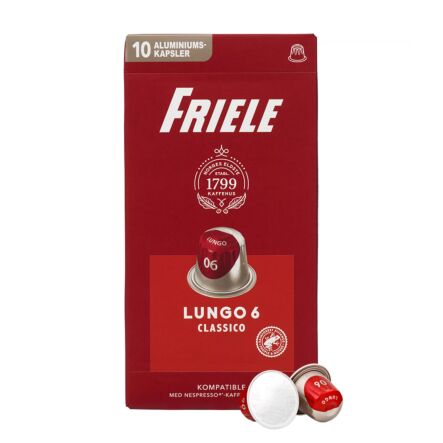 Friele’s Lungo 6 is made from medium-roasted beans, creating a coffee with a fresh flavour and notes of cinnamon.

At number 6 on the strength scale, you get plenty of aroma and fullness, and a shot of caffeine that is guaranteed to pick you up, but without being too much. If you want a fuller flavour in your cup, you can also use the pod to brew an espresso or ristretto.

This aromatic Friele coffee is UTZ certified. It’s a great way to start the day, but can also be enjoyed later on in the afternoon if you need an energy injection.

We deliver this delicious coffee from Friele in packs of 10 aluminium pods that fit in your Nespresso® machine. And as always with Kaffekapslen, we deliver at a reasonable price, lightning fast and right to your door.

Friele is a Norwegian coffee roastery that has supplied Norwegian households with coffee since 1799. Today, Friele is Norway's largest coffee producer, and part of the Dutch Douwe Egberts Group.